Designing a way for agents to trigger actions in external systems, without leaving Gladly

Ulta Beauty just signed a contract to have Gladly’s customer support software power all of their contact centers — over 1,000 agents in all. At the time, it was the second biggest deal in the company’s history. We closed them on the promise of giving their support team a “single pane of glass,” meaning agents would never have to leave Gladly to help customers. Cancelling and refunding orders, adding loyalty points, update shipping address, and more, could all be done within Gladly’s UI.

Currently, agents had a dozen different systems to jump between to complete a customer request (we learned this while shadowing agents during the sales process). They used a mix of off-the-shelf software and homegrown solutions, stitched together by their IT team, which slowed down agents and hurt customer satisfaction scores (commonly called CSAT). By providing all this functionality within Gladly – and with a consumer-grade user experience to boot – agent productivity would increase, as would customer satisfaction.

There was just one problem: we hadn’t built it yet. And we didn’t know how. 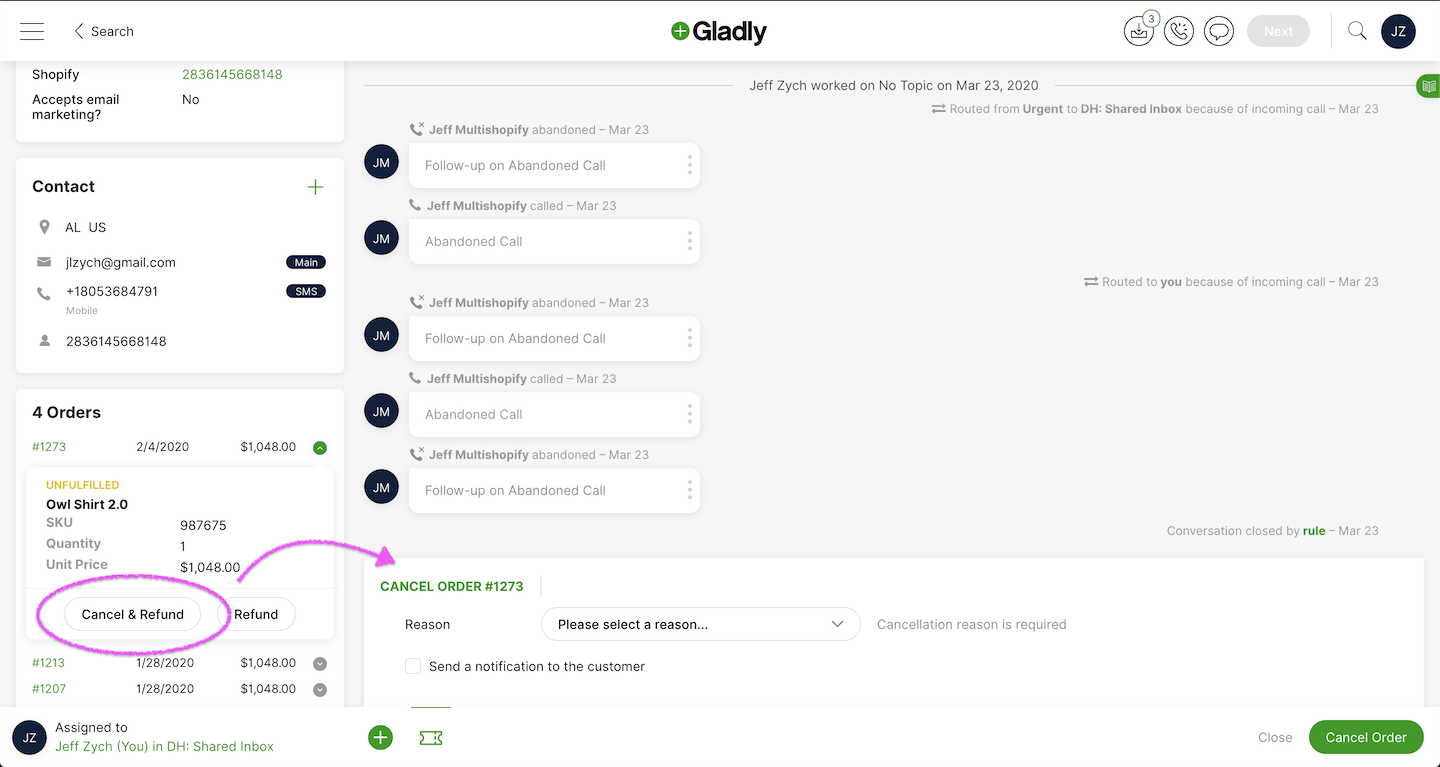 The main screen agents use when helping customers, showing the full timeline of conversations with that customer in the middle, and information about the customer on the left. We added “Cancel & Refund” and “Refund” buttons to the order card, which agents can click to issue a refund and cancel the order, all without leaving Gladly. Behind those buttons lays a lot of technical wizardry we had to figure out.

Making agents more efficient by letting them perform common tasks with Gladly wasn’t a new idea. We had been hearing about it for months from other prospects and customers. Ulta was just the first deal that closed that put it in the contract. 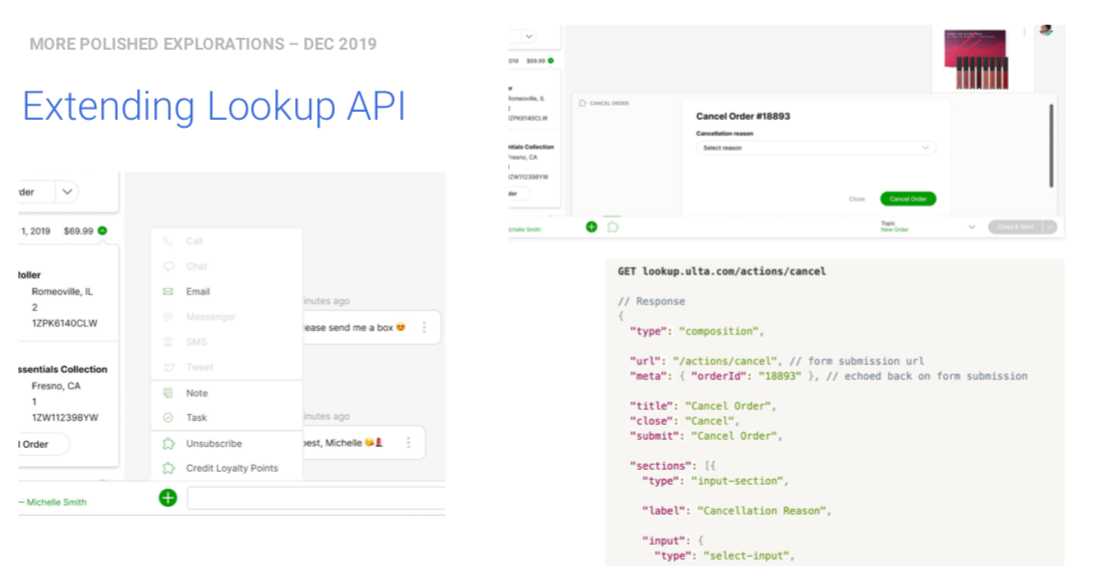 We sold Ulta on the strength of a polished mockup of the agent’s experience, and a hand-wave-y technical diagram (pictured above). We knew it was technically possible, but we didn’t know specifically how. The challenge was to build a solution that:

The agent experience was easy. It’s just buttons and forms. The hard part was what happens when those buttons are clicked and the form was submitted? How would we know what data to collect from agents, and where to send it once submitted? It would be easy to build one-off solutions that required little to no work on our customer’s end, but across all of our target customers there were endless combinations of systems to build against, making that option intractable.

To make this agent experience a reality, the PM, engineering lead, and myself got in a room to review the mockup and whiteboard potential ways of building it. We came up with 3 that were viable (and 1 that was technically viable, but didn’t meet our UX goal):

I did lo-fi mock-ups of each of these options to ensure we were all talking about the same thing, and to review with customers. 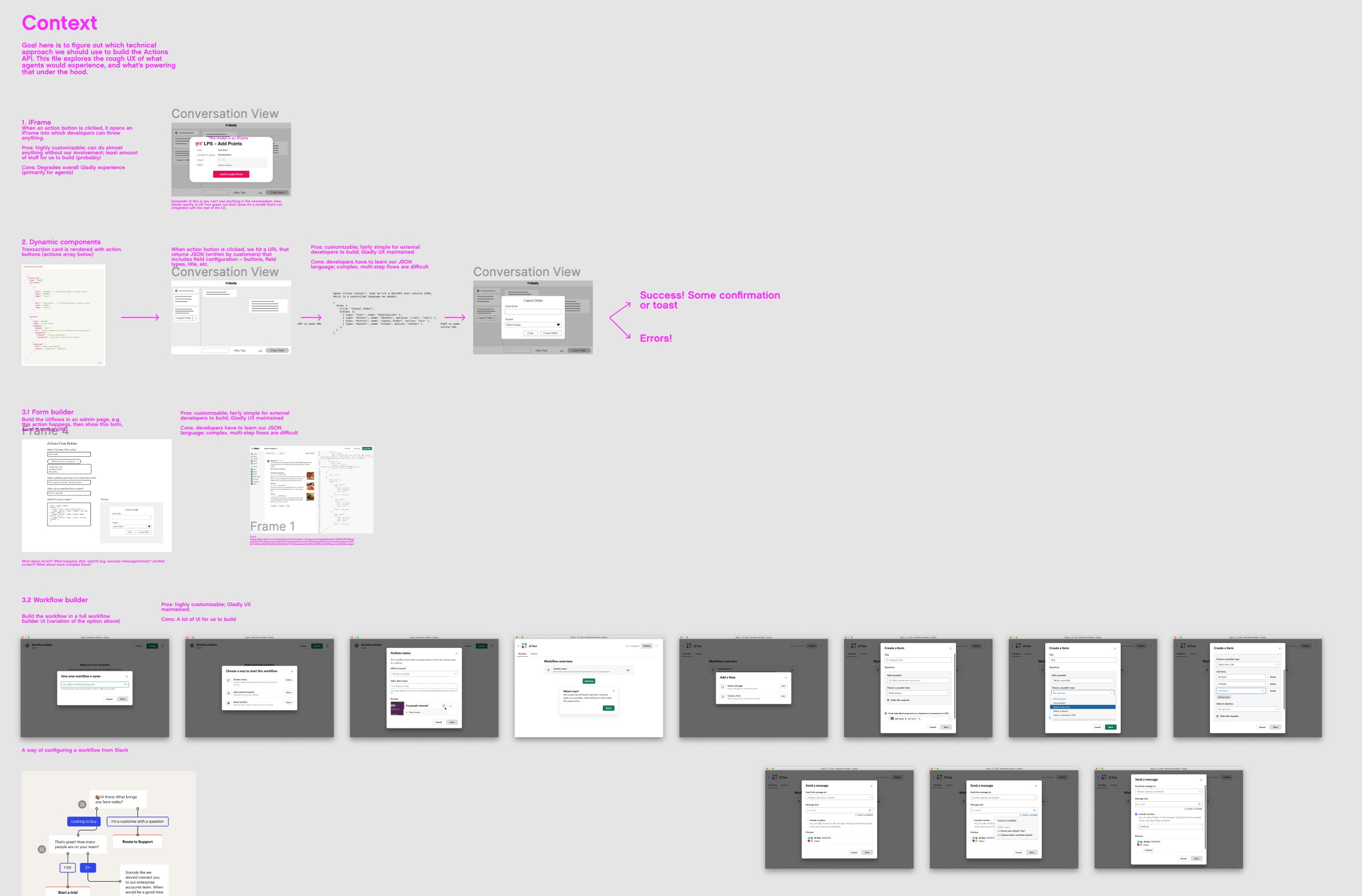 Lo-fi mockups of the 3 paths we were considering

So which was best? Each had tradeoffs, both for us, and for customers. Would developers want to build UIs within Gladly? Would they want to learn how to build custom UIs with our JS library? Would an actions JSON blob be expressive enough to perform any action customers threw at us?

We reviewed these approaches with developers who were already using our Lookup API. After talking to 3 customers (we wanted to talk to more but finding representative developers who were interested in this feature on a short timeframe was difficult), a pattern emerged:

The winner, then, was adding an actions JSON blob to the Lookup API to declaratively create a UI out of a limited palette of building blocks. After getting feedback from customers, this felt like the obvious choice. But at the outset, that wasn’t so clear. That’s why it’s crucial to stay close to your customers when designing new features.

Extending the Lookup API was less for us to build (compared to the other options), easy for developers to learn, just expressive enough to do almost anything without giving developers enough rope to hang themselves with.

Up to this point, I had stayed lo-fi on purpose. We weren’t sure how we were going to build it, and the architecture would impact the experience for both developers and agents, so going hi-fi too early would have been a waste of effort. I would have been polishing details that were likely to be thrown out. Plus, staying lo-fi lets us stay nimble and quickly throw out options that aren’t working without a second thought. (Read more about my take on staying lo-fi).

My whole strategy for this project was to have the UX take a step, then engineering, then UX, then engineering, and so on, each time moving into higher fidelity. Now that we felt confident in the underlying architecture, I moved into mid-fi and fleshed out each screen, error states, and confirmations (screenshot below). 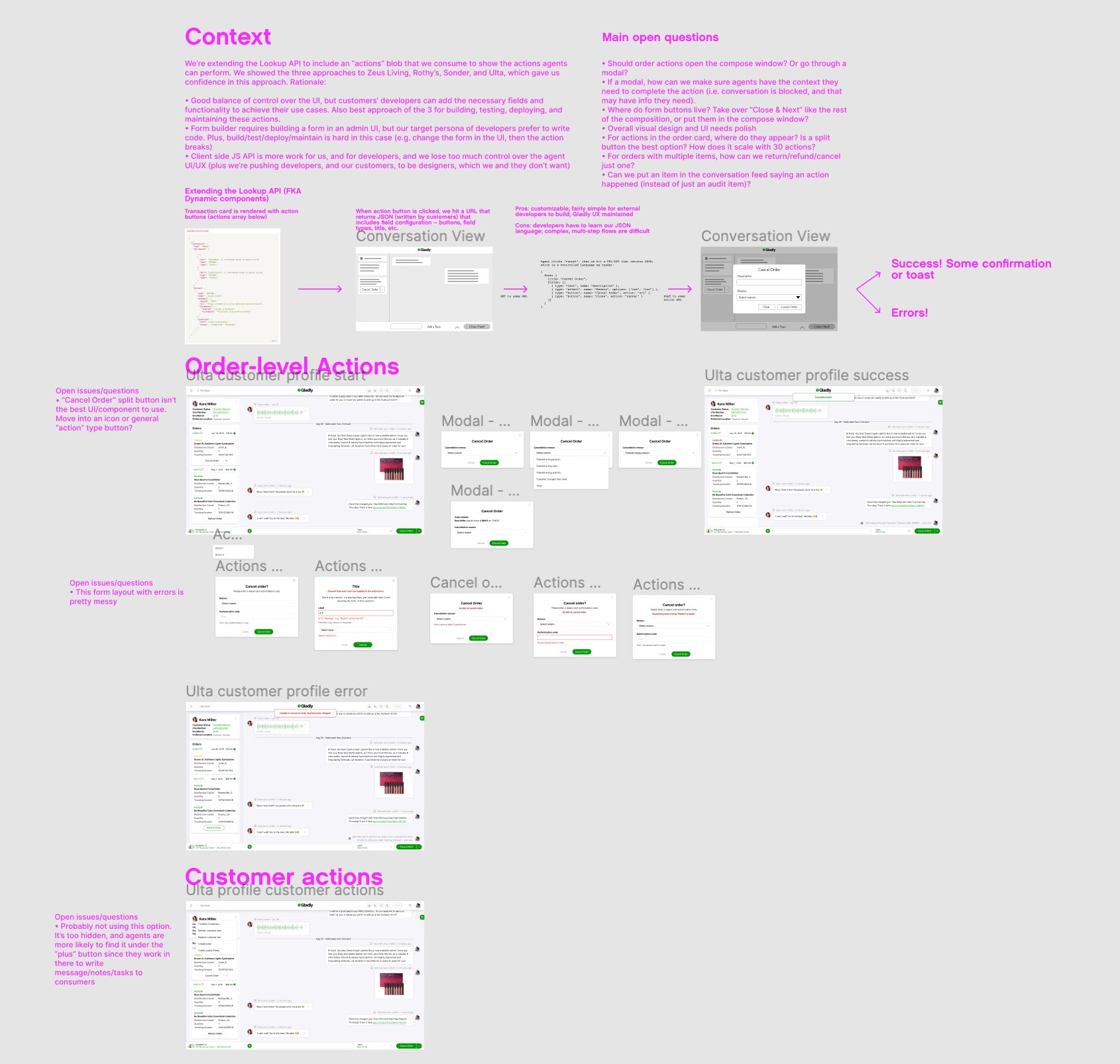 Screenshot of my Figma file of mid-fi mockups

Now that we had line of sight on what we were shipping, we wanted to get final input and sign-off from our executive team. Plus, Ulta wanted specs to build against, so we needed to keep the execs in the loop on what we’d be showing them the following week, when we were flying out there.

The executive team’s feedback was very positive – the project was on track, would make Ulta successful, was general enough to work for other customers, and was a good experience for both agents and developers. Just one piece was lacking: I hadn’t explored enough options for the agent experience.

I showed agents completing actions through a modal flow, but the CEO pointed out that this would stop agents from being able to see information about the customer and the conversation history, which may include details necessary to complete the action (like the reason they’re cancelling an order, for example).

I got so caught up in the technical constraints and staying in lock-step with engineers that I didn’t spend enough time exploring options for the agent UX. This piece felt “simple”, so I focused on the hard bits. But I didn’t come back to re-visit the initial decision we had made in the sales mock. Lesson learned for the future: explore a wide variety of options for every piece of the experience.

We flew out to Chicago the following week, and the meeting was a resounding success. The Ulta team was happy with the fleshed-out API spec. We whiteboarded what they would have to build to get this working, and the only roadblocks were on their side. Their technology stack was a mishmash of various technology vendors and homegrown systems, most of which lacked APIs to integrate with us. Thankfully that wasn’t a knock against our solution – it was a knock against their other technology vendors. They would have to work through that on their side. For us, it meant we had the all clear to start building. 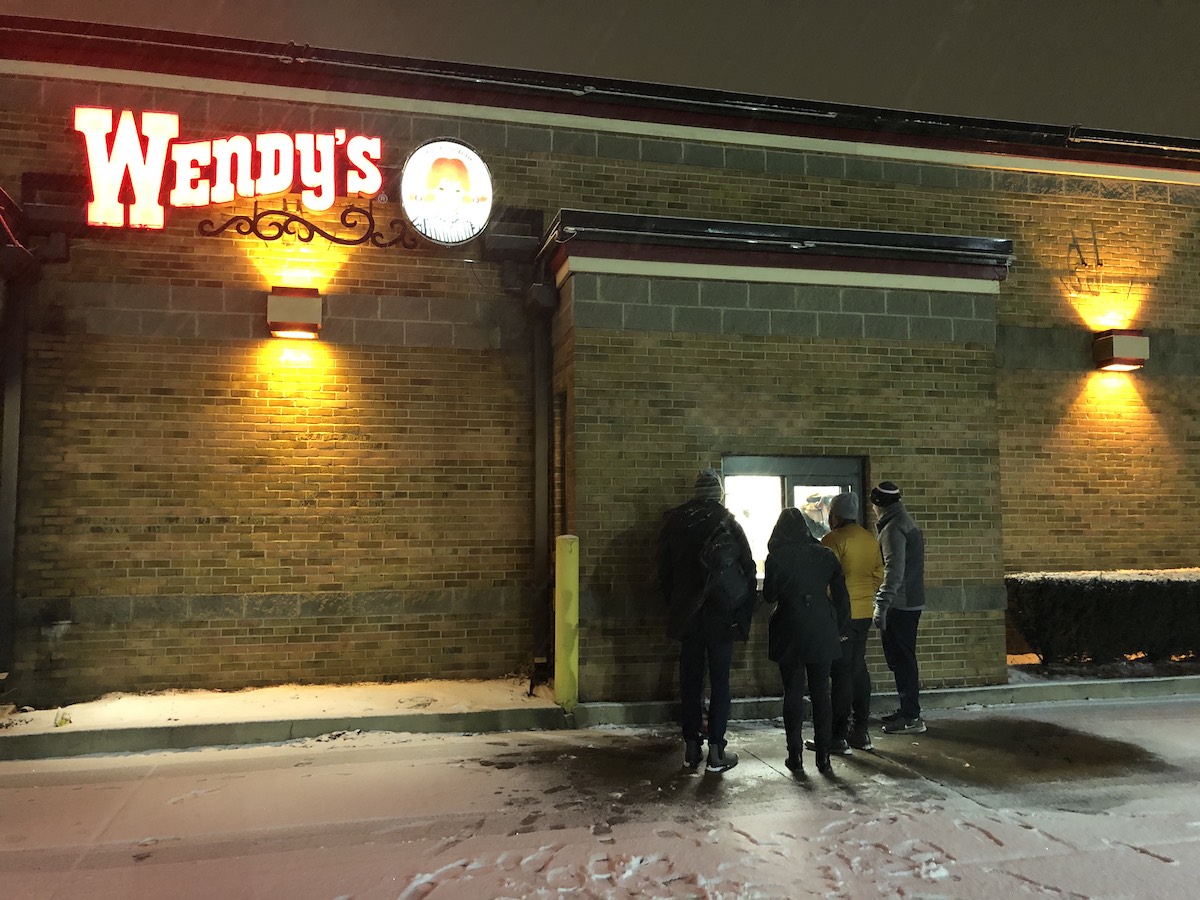 The team huddled outside Wendy’s trying to get food the night before our meeting. Everything was closed, including the inside of Wendy’s, so we had to walk through the drive-thru.

Upon returning from the Ulta meeting I passed off the work to another designer. There were a few reasons for this:

I filled him in on all the research and the feedback from the CEO, and asked him to explore a wide variety of options so we could choose the best one for agents. Even crazy, out there ideas that may not seem feasible! 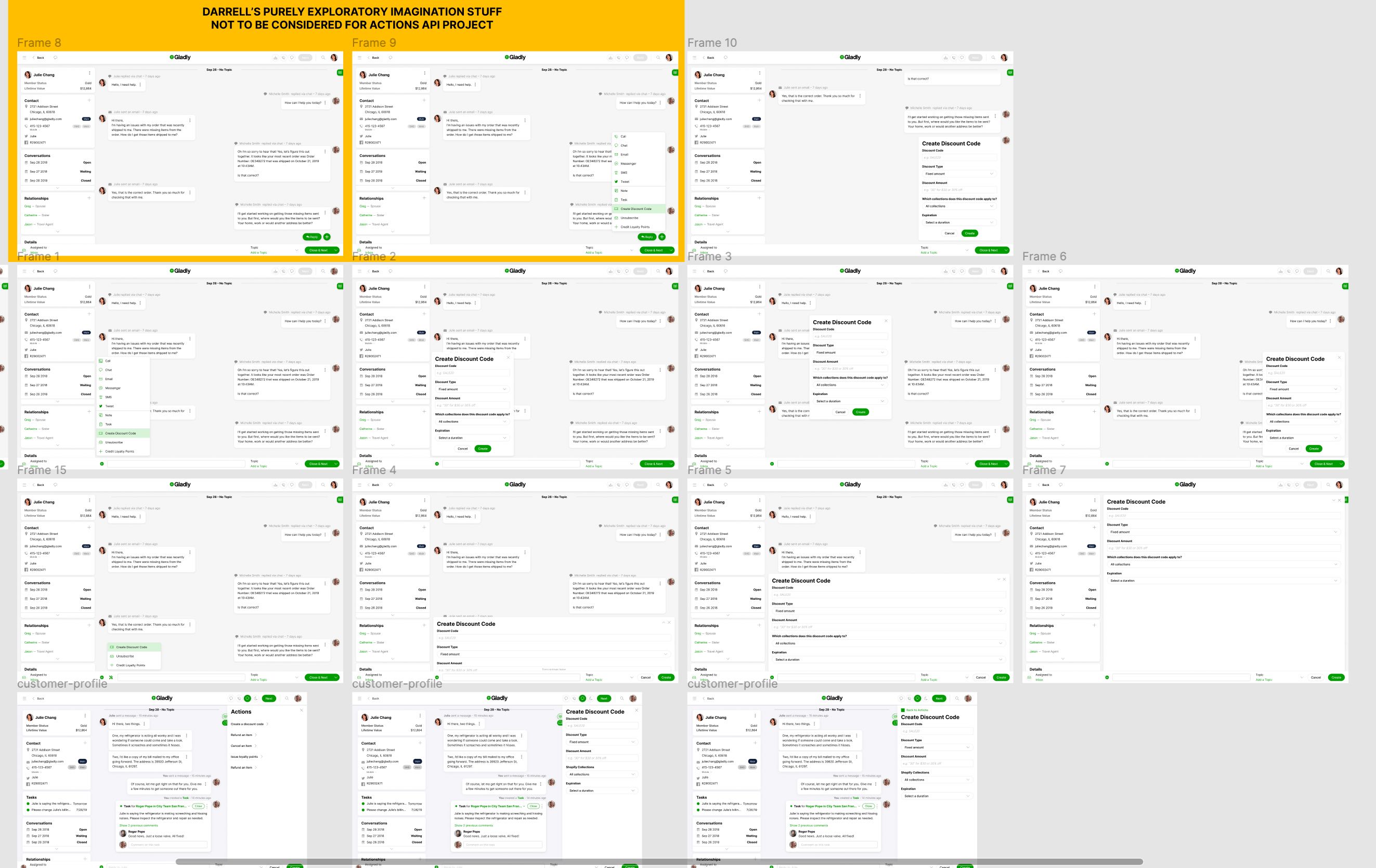 He did an amazing job of doing this, including some pretty experimental stuff that wouldn’t work for the initial launch but would be worth re-visiting later (that’s the yellow box in the screenshot above). I expect this from all of my designers, making it even more egregious that I failed to do so myself.

We narrowed down the options to a handful that were feasible to build in time for the go-live. Each were usable, and had pros and cons, but none were a stand out winner. Normally we’d do some user testing to learn which was best, but that wasn’t an option in this case. The engineers needed to start building immediately to have any hope of hitting the launch date, so we went with the CEO’s preferred option, but made sure the engineers would build it in a way that would let us change it in the future after we got feedback from agents using it in the wild (which would be more accurate feedback anyway).

The designer quickly polished up the designs, while engineering started coding. They hustled hard and shipped it in time for the go-live date.

The final agent experience we shipped

All systems were go for Ulta and then… they had to push back the date. In my experience this isn’t uncommon when building product for enterprise customers, but it’s still disheartening.

In this case, though, while we were building the Actions API we signed another customer who was eager to use it. In fact, the demo of this feature is what pushed them over the finish line.

We turned it on for them and I wish I could say it was an immediate hit, but… it wasn’t. It only got a trickle of usage.

Why? We set-up weekly check-in calls with the customer to get to the bottom of it, in which we learned 2 things:

After fixing the bugs and doing re-training, usage steadily grew week over week. Behavior is slow to change, even with training, and especially when the actions are as serious as cancelling orders and issuing refunds — actions that agents want to make sure they’re doing properly.

Even so, the first customer loved the feature, and agents had positive feedback once they got comfortable with it. I wish I had numbers on the time saved or increase in CSAT, but sadly the company had COVID-induced layoffs, so I left before we had enough data to get those numbers.

While the feature was just taking off as my time there wound down, it was a hit in sales demos. Prospects loved making agents more efficient by not having to leave Gladly, and it was the reason several customers signed with us while I was there.

Overall the project was a huge success. It closed deals and broke new ground in customer support software, while setting us up for a bunch of new innovative features down the line (like exposing these actions directly to consumers, so agents wouldn’t have to be involved at all).

Even so, there are always lessons to be learned from every project.

All said, the project was a ton of fun to work on, challenging, and hugely valuable for our customers.