Looking for a way to get users to engage with your product or service? Just tell them everyone else is doing it. Although we like to think of ourselves as independent beings who make our own decisions, studies show that touting popularity and ubiquity is a very effective form of persuasion.

This is known as social proof.

Generally, we don’t like to stand out from the crowd. Our lizard brains tell us it’s dangerous to deviate from the norm. In prehistoric times, deviating from the group meant getting attacked by predators. Predators are not much of a concern anymore, but studies show that sticking with the norm still persists and affects us in other ways. For example, one study tested the effectiveness of wording in persuading people to use less electricity. Four different placards were placed on the doors of residents, which informed them:

The last group reduced energy consumption by 10% — the highest of any group. This means it was more effective than saving money, espousing benefits, or explaining it’s the “right” or “moral” thing to do.

You can use this same phenomenon to increase conversions on your site through A/B testing, whether that’s signing up for a service, donating money, or using a product feature.

Spillnow.com ran a test that demonstrates this phenomenon well. The site is a place for people to spill their guts on anything bothering them, and other users can respond with advice and encouragement. However, they had an issue with too many people venting and not enough users responding. In order to increase responders, they added this text to the “spill” form: “50% of people go on to be responders.” This simple piece of text increased the number of users who respond to other people’s spills by 27% (from 48% to 61%).

Another great example is Basecamp’s homepage, which has multiple types of social proof. 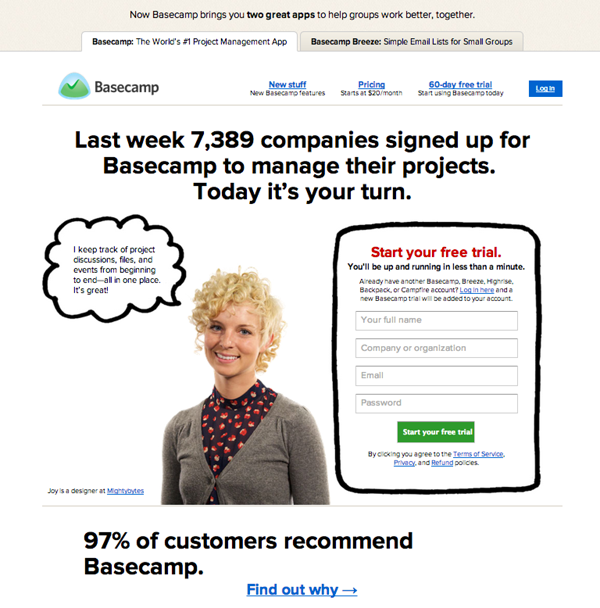 At the top of the page they say, “Last week 7,389 companies signed up for Basecamp to manage their projects. Today it’s your turn.” The main content features a woman saying she uses Basecamp (the picture also has the added benefits of making the statement more believable and trustworthy). And at the bottom, they say, “97% of customers recommend Basecamp. Find out why →”. These are all great ways to demonstrate that lots of people use your service and increase clickthrough.

And this is just the tip of the iceberg — there are many ways social proof can be used across your site. These are all quick, simple changes that can be added to just about any page using our A/B testing tool, without requiring design or engineering resources. If you’re looking for a way to get users to click your call to action, use a product feature, or engage with your site, then social proof is a great way to boost conversions.

“The Secret to Turning Consumers Green” — The Wall Street Journal

Next article Performance comparison of serving fonts through Typekit vs Cloud.typography »